A project that visualizes sensory experience with location

Ever since I started my journey of visualizing data in the past few months, I’ve had a lot of fun and was able to interpret the patterns/meanings behind the datasets, also, I’ve learned there are something that can’t be measured or express neutrally throughout the information visualization works. Thus, I’d like to add a little bit of n touch on my new info viz work, a sensation map that mainly focuses on sound and smell data collections.

After I started my school life here in NYC, I discovered more aspects than just those attractive touristy elements here. As a tourist, I used to only pay attention to how fascinating the city skyline and the vibes are, and ignored the rest of the annoying elements like how dirty/smelly the subway/streets are, and how loud the places are.

Thus, I’d like to collect/aggregate all the related datasets together and hopefully can be a reference for people who care about sound and smell when staying/living in NYC.

The NYC Sensation Map-places for planning a date or hang out with friends This project aims to analyze the sensory experience of smell and sound in Manhattan. By aggregating existing data of NYC, the audience should be able to interpret which area in Manhattan would be a good choice to hang out or stay in.

This project would contain the datasets that should be able to answer the following questions: 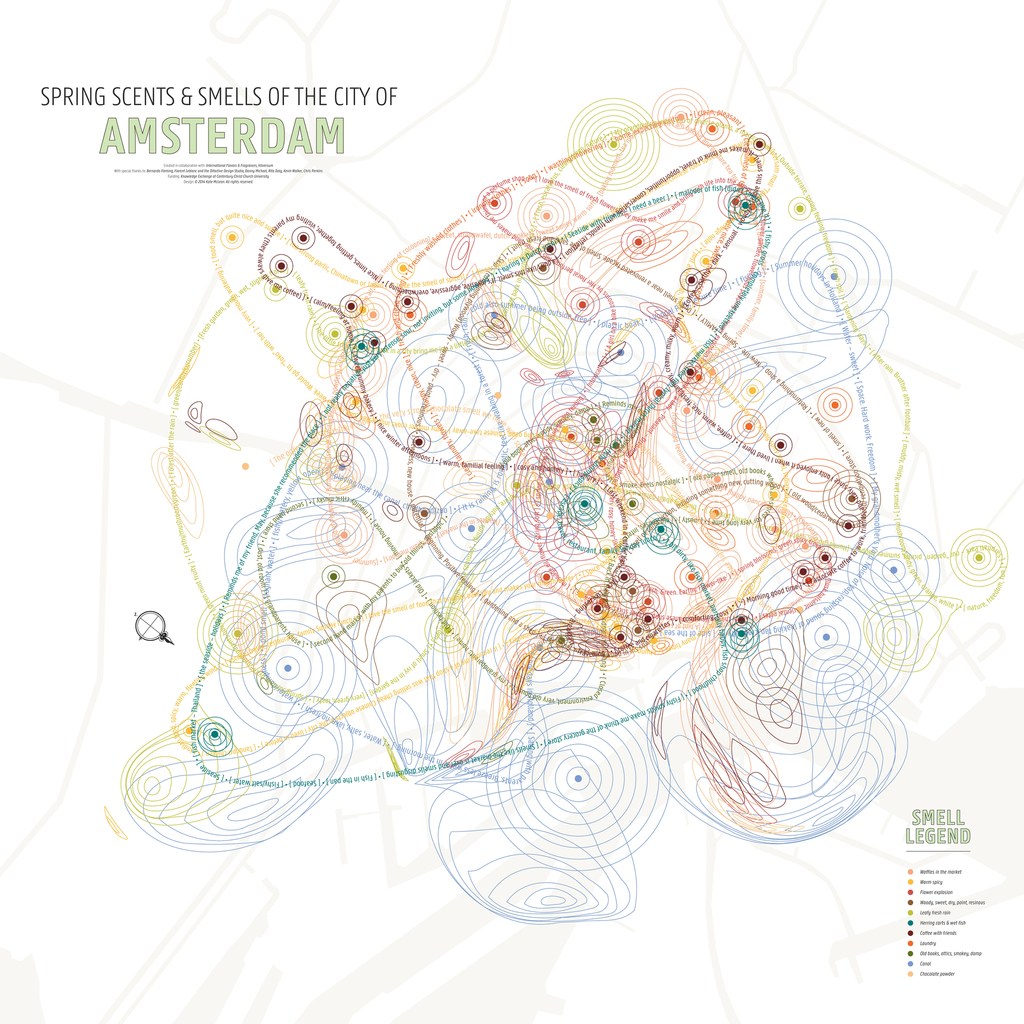 I am a pretty sensitive person when it comes with smell and taste. When I was doing some research on map creation for the GIS class, I stumbled on one of the Carto best map collections- Sites, Sounds, and Smells of City Living. This collection includes various topics such as population, music taste, the shadow of the blocks, and even the smell of a city.
Kate McLean, is the artist and designer to create the “smellmap of Amsterdam”. Her goal is to visual-rendering the “human experience of urban smellscapes ” around the world, thus, the smellmap of Amsterdam is just one of her map creation works.

The smellmap of Amsterdam collect the smell data from 44 people. Over 650 smells were detected during a 4 days 10 smellwalks session in 2013. The final graphs showcase the locations of the smell as dots, the range of spreading as a circle, and the drift direction of smell as warped contours based on wind direction data, and the colors of the dot are the categories of detected smells.

I really like how McLean visualizes the smells on the map. It reminds me of the topographic map- contours of the landscape due to my background as a landscape architecture design student of my undergrad. The concerns might be the approach of displaying data is similar to contours especially it’s on a map. Also, that type of visualization can also be interpreted as sound related data display since that’s the conventional way of marking soundwaves and the spreading direction. But the overall reading experience is still quite delightful since the annotations are understandable and the visual design is also compelling in a way. 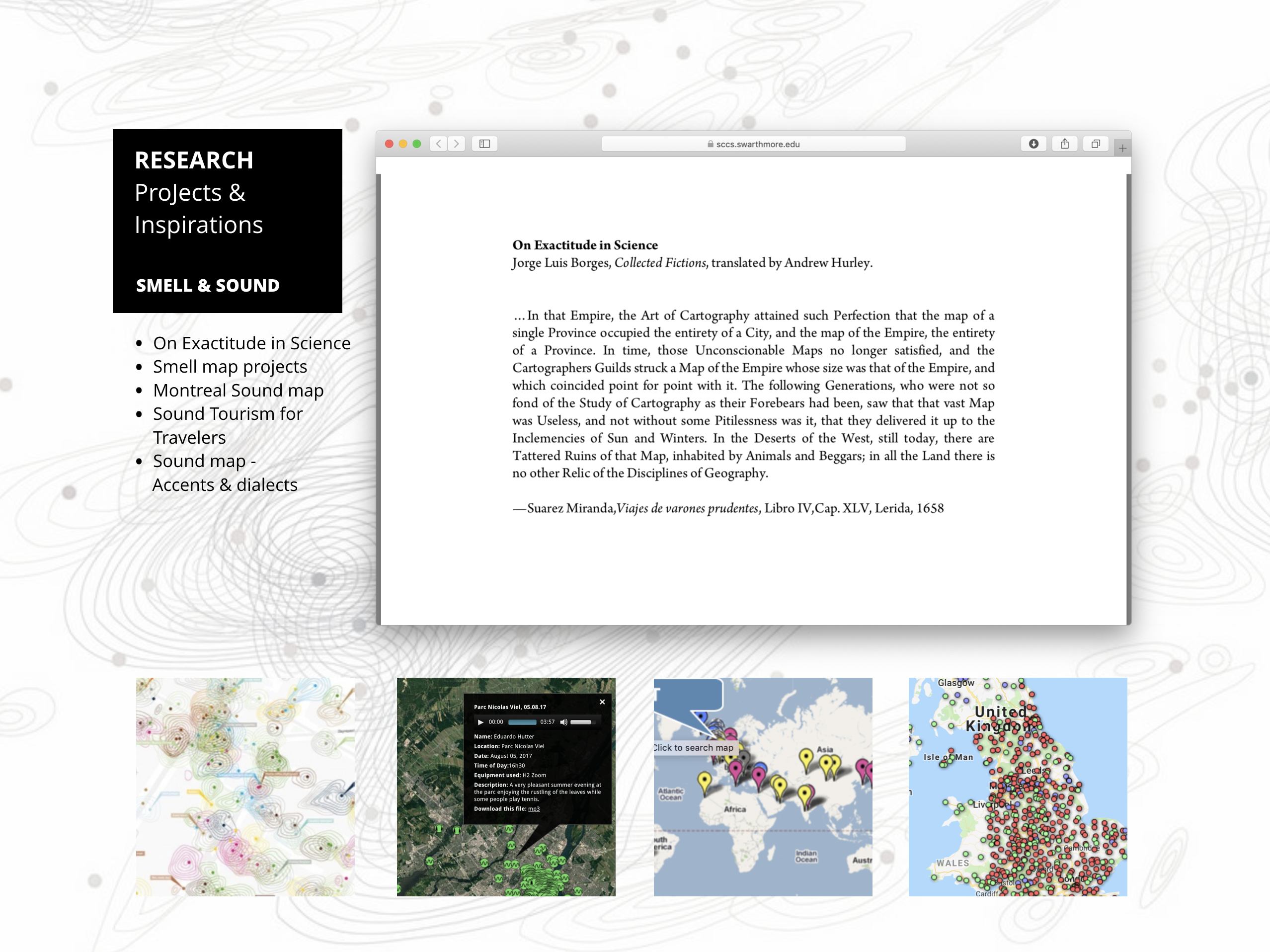 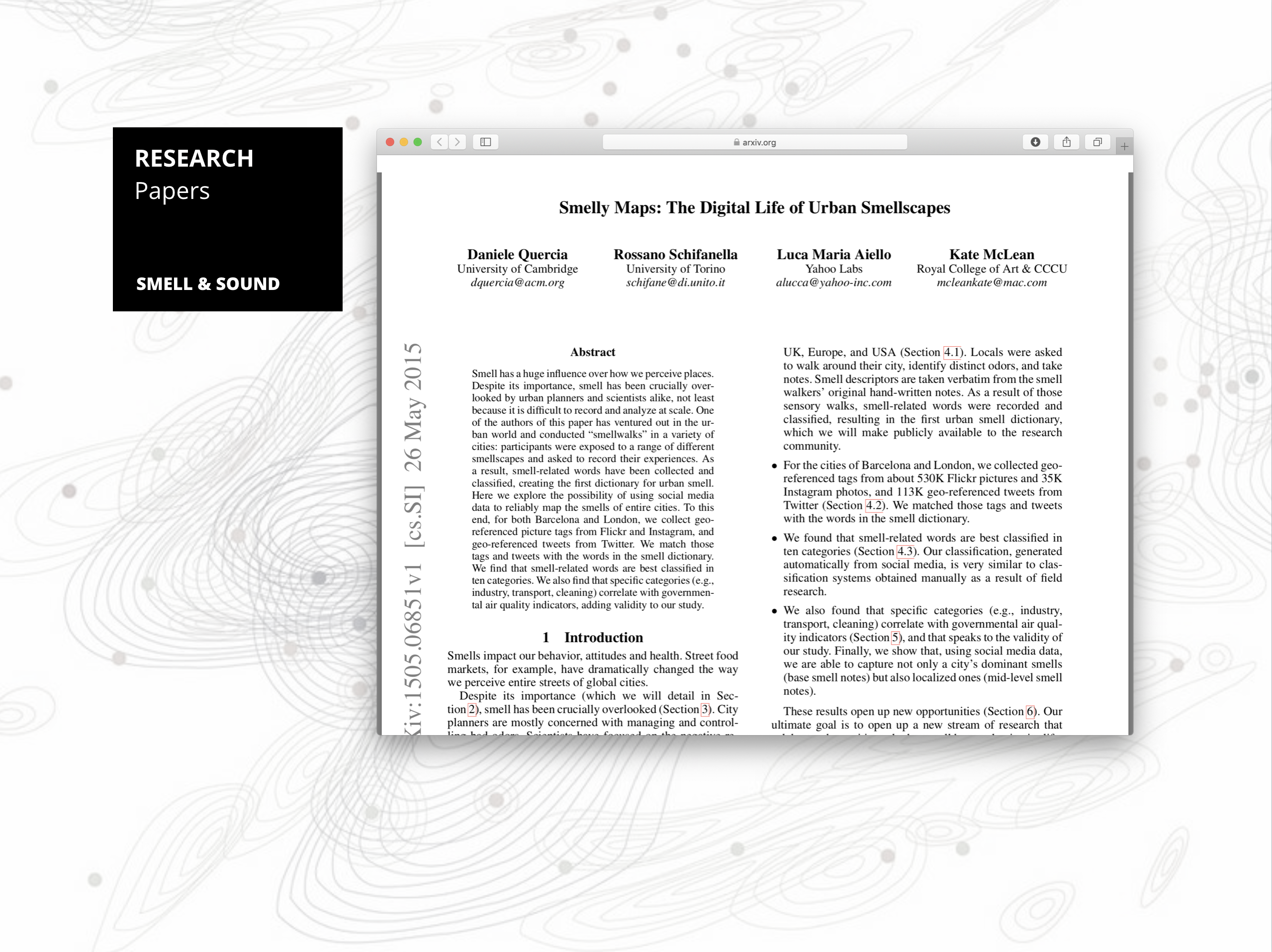 Other references are also interesting and pretty inspiring. The Montreal Sound Map project is a cool way to showcase how crowdsourcing can help to build/document the sensory experience of a city. Users who have mobile devices are encouraged to record the sound around them, then upload to the platform with annotated location and images. Project Sound map is an interactive map created by British Library to let users check different sounds that associate with topics like accents or wildlife recordings on different location. The goal I believe is to capture, reproduce and even simulate the “sensory experience”, which I think it gives more context and adds on more of human touch to the audience.

Data collection and aggregation is the most challenging part of this design. Finding the desired dataset was almost impossible until a few rounds of discussion with my advisors and refine the measurement criterion. From data collection to final visualization took a lot of effort, but the outcome is definitely worth the effort. 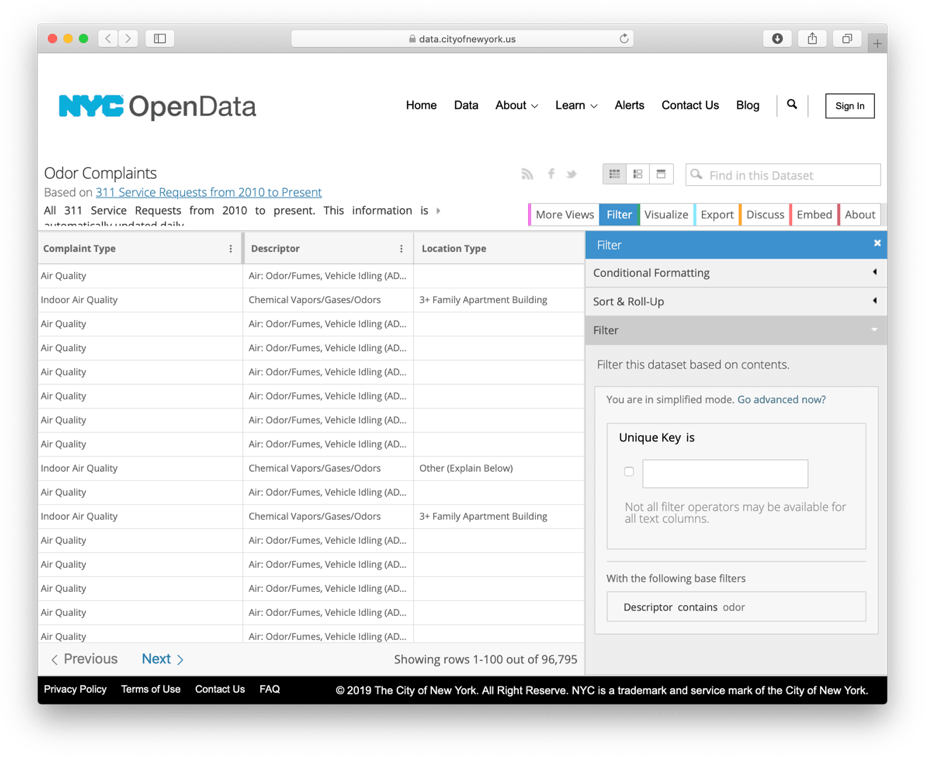 As I’ve mentioned in the previous section, most of the sensation maps collected the data with specific goals for the project, or, ask the source from the crowd. Unfortunately, I don’t have enough time and resource to plan and execute smell/soundwalks, or ask users to generate the data for me, however, I still figured out a workaround way to aggregate my data and hopefully making a bit sense here.
My goal is to create an interactive map that allows users to adjust a few criteria while deciding where to go out or stay in. Those criteria I defined as the factors to determine if an area is good for stay in or go out are totally subjective and based on my own preferences.
Sound and smell are the factors I care the most the whole time, no matter where I travel to visit or stay to live for a while. Thus, my own screening factors to determine if an are is good to stay in must be quiet and smell good or at least no smell. A good area for going out must have places like museums/galleries, various food options, and events to choose from.

Since I can’t find any smell and sound data that is collected with correct measurements such as decibel for sound or odor measurement unit for the smell. Thus, I can only get anything that indicates similar data, the only thing is that’s totally subjective and different from person to person – the complaints.
Sound complaints datasets I’ve got are Party Noise Complaints in NYC, and Constructions in NYC as the compensation for potential noise complaints. I only got one complaint dataset for smell- the Odor Complaints from NYC 311 Service, which includes various interesting odor classifications. One of the odor classifications in this complaint is “sweet odor”, that I, later on, extracted it from the “odor complaint”, and defined it as one of a good factor for areas to go out, just because of my own personal preferences, I love the sweet smell!
Some of the datasets I collected don’t have GEO points/info, or latitude and longitude data, thus, I ended up with working 3 datasets for sound/noise data aggregation, and 5 datasets for smell data aggregation for this map creation. 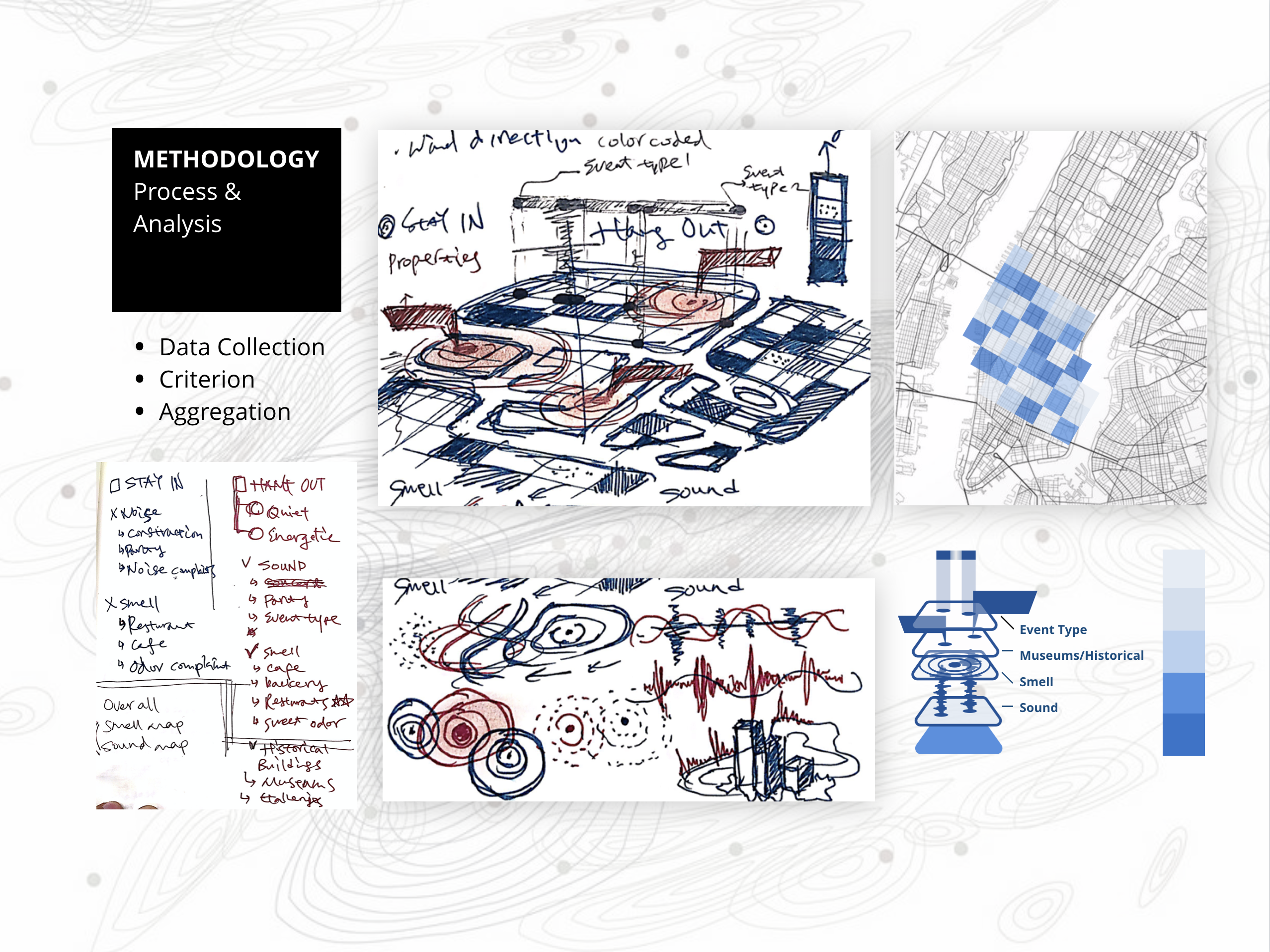 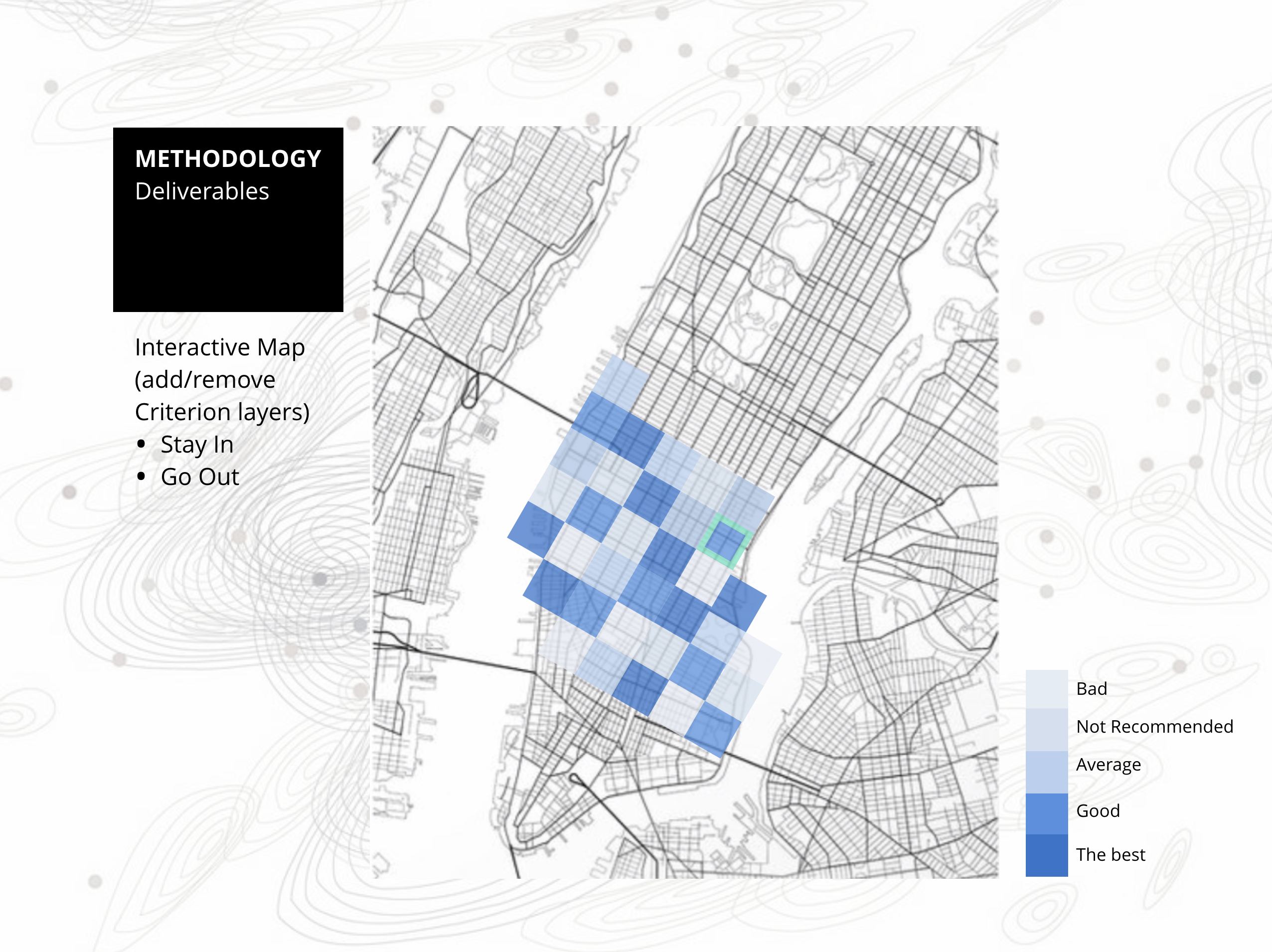 My thought on visualizing the data aggregation is really simple, mark the locations with counts of different criteria. Since my data aggregation logic is pretty simple-just do the total counts for a specific range of the location, and mark it with scaled color indication. The Hexbin map is the final outcome for this information visualization work since that’s the most common way of displaying data counts in a geographical manner.
But I did think about to make info viz works have more of human touch and more representable of each of the criteria I selected. So I did a sketch to showcase how I’d like to evolve/add to my map with different icons or patterns like sound frequency icon as the noisy locations, ripple as the smell spreading distributions, and maybe a small flag for the notable buildings like museums/galleries/best cafes to display on top of a Hexbin map. 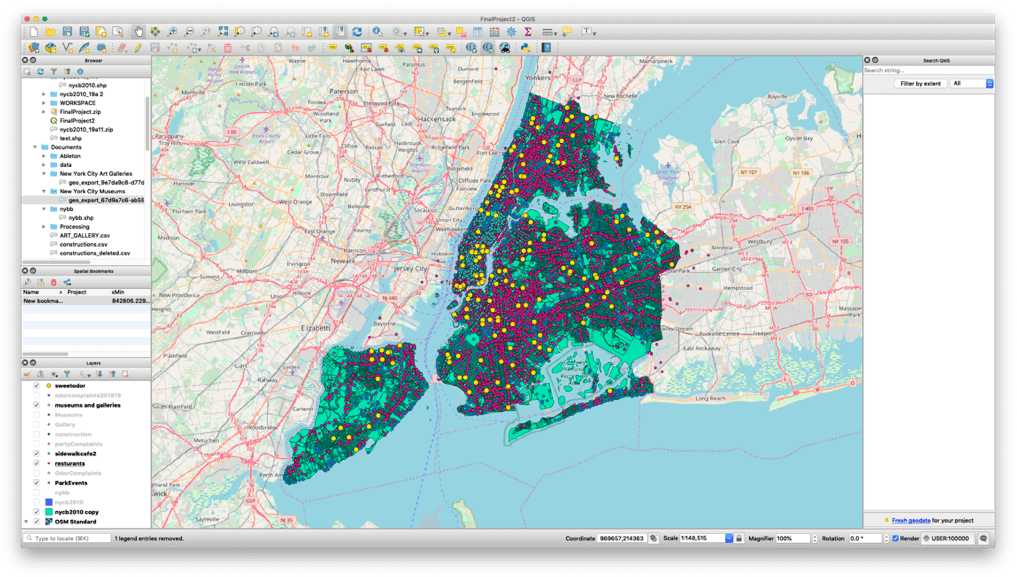 I’ve tried Carto and Tableau Public, but eventually made the analysis in QGIS due to dataset size restriction (Carto can’t handle big dataset and the multiple aggregation layer function didn’t work). Tableau Public can’t really identify the GEO location info correctly of some of my datasets.

After creating hexagon grids on the NYC map, I aggregated the data layer by layer by joining tables, and then calculated the total counts for both stay in and go out maps. Then I defined the classes for the count number scales for both of them and make sure the best recommendation all mark in the darker colors. Also, some of the areas might either have no data at all, or, might have high scores for both stay in and go out. So I also set up the extra formula and created a new graph as a combined/compared map as an overview. 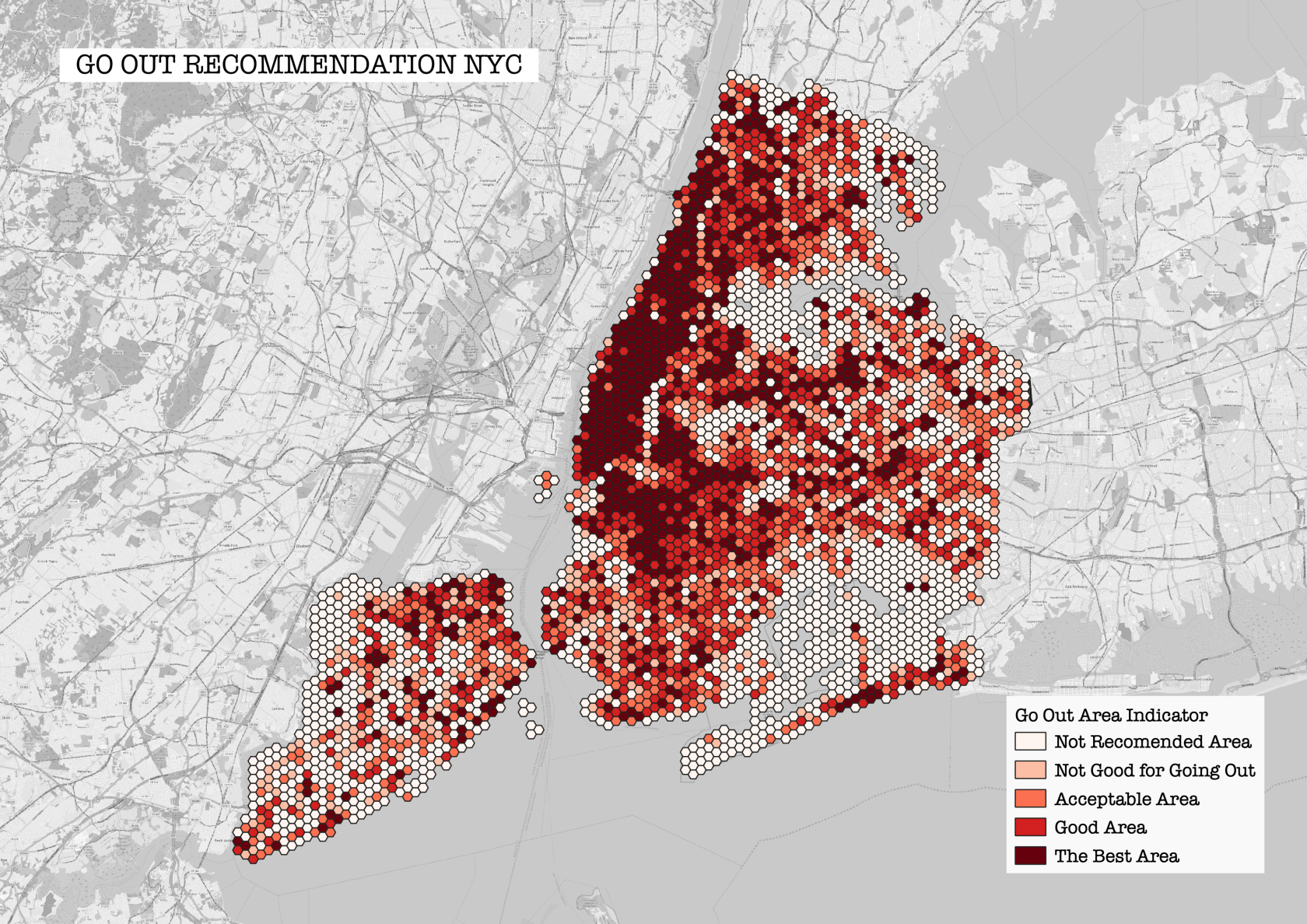 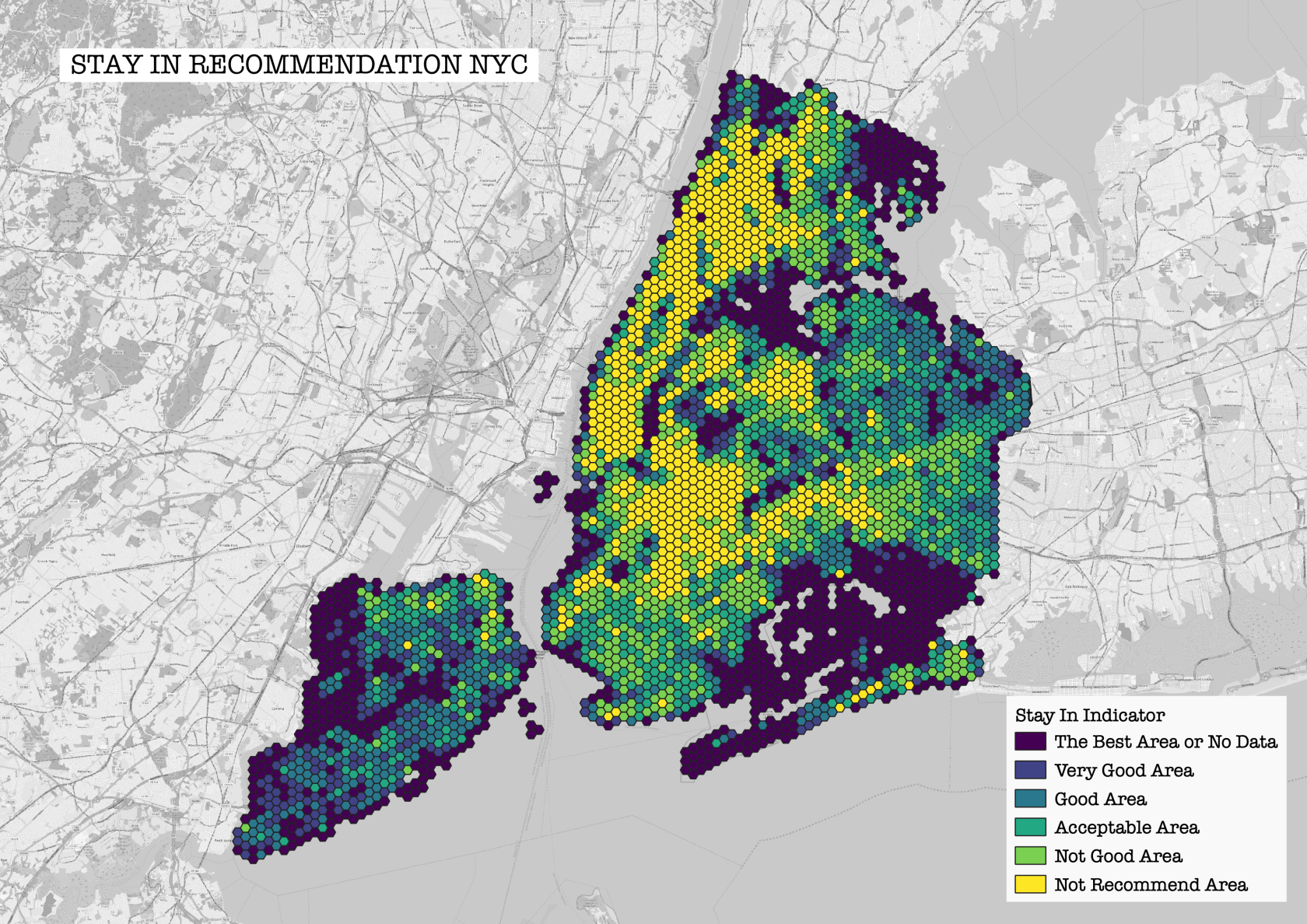 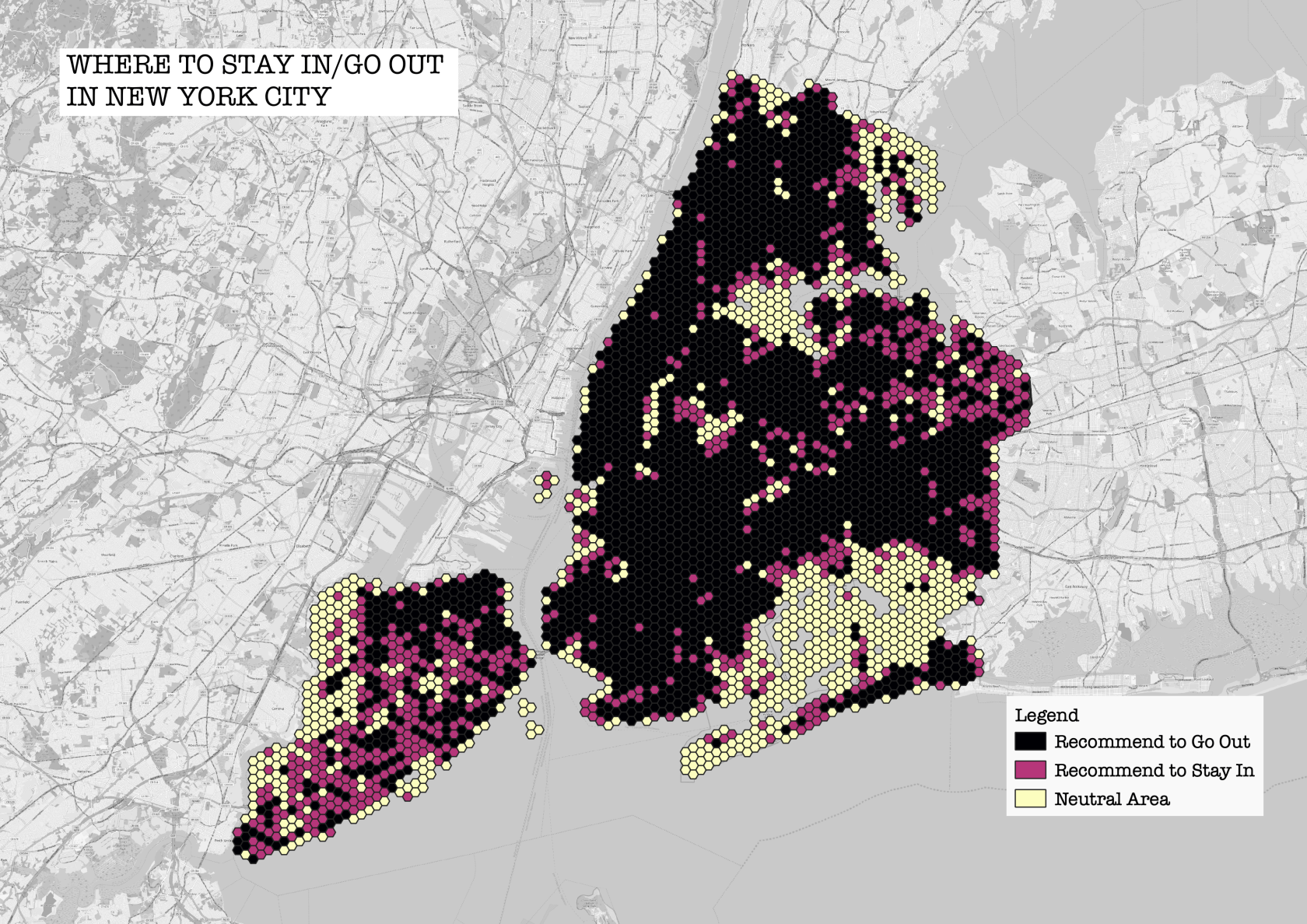 As I mentioned previously, how I determined the criteria for staying in or going out is really subjective, so I’d hope to make an interactive map if I have more time. Users would be able to adjust what they care about when they choose to stay in or go out by selecting/unselecting the criteria on the map.

The complaints dataset were the key element of this design, surprisingly

Sensory analysis is fun especially when it comes with personal preferences. Individual preferences cover from various elements such as cultural background, personality, and circumstances. In this project, I add“sweet odor” as a positive factor to count as part of the Go Out area measurements, thus, the result might be highly biased and subjective.
However, I still enjoyed playing around with those complaints datasets and turning that into recommendation indicator, just hope the audience would also enjoy this playful data viz map.There are still a few things I’d like to enhance to make the data aggregations have more sense:

As the temporary end of my information visualization creation journey, I’ve been thinking about what’s been explored and what’s the next step and improvement. Maybe I’ll focus more on storytelling, such as add more visual elements to add on the human touch, or, try to point out a serious problem in a more fun/playful/enjoyable and understandable way.